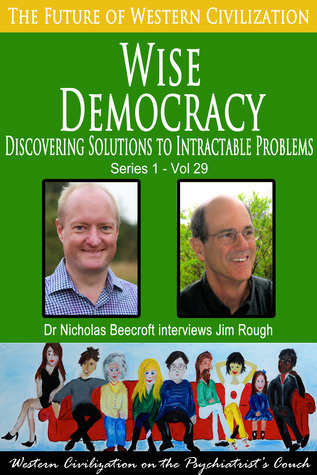 In this interview Jim describes how the quality of conversation which really counts along with the people who have that conversation.Dynamic facilitation takes people beyond the traditional debate, dialogue and deliberation into a choice-creating conversation which generates new potential outcomes. The groups work best when drawn randomly from the population. On first inspection that may sound strange because our tradition is to choose experts, representatives and those who have a particular strong opinion or interest group.With years of experience in facilitating the democratic process, Jim has found that there is a deep wisdom which emerges from randomly chosen group taking the mainstream interest and seeking to serve the whole.

He finds that a consensus emerges which is often transformational and inspiring to the wider community. He has taught people globally to use this technique any give some examples of work is working well, particularly in Austria.We tend to take democracy for granted is as if it is something which we have already achieved. Jim points out that democracy is something which needs constant evolution, requiring ongoing attention and adaptation to our needs and situation. He makes a powerful call for integrating dynamic facilitation and Wisdom Councils into our existing structures so as to help raise our game to meet the substantial challenges which we face.Jim is a business consultant, speaker, and principal seminar leader for the seminar Dynamic Facilitation and the Wisdom Council.

He has been leading public seminars on Dynamic Facilitation for over 20 years, while facilitating for clients that include government agencies, corporations, and community-based organizations. He is author of the book “Society’s Breakthrough! Releasing Essential Wisdom and Virtue in All the People”, which Robert E. Steele called, “...certainly one of the hundred most important books available in English.” He is originator of the Wisdom Council process, which is now being implemented in many cities throughout Central Europe, government agencies, cooperatively owned businesses, schools, and communities.