The Communist Subversion of Czechoslovakia, 1938-1948: The Failure of Co-Existence Josef Korbel 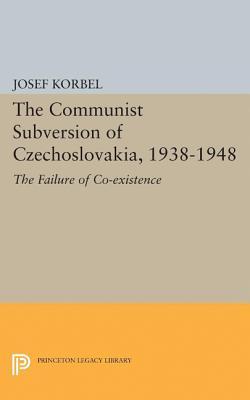 Mr. Korbel reveals the gradual erosion of all areas of the nations life-political, economic, cultural, military, social-by Communist techniques. He traces the hopeless attempts at coexistence on the part of such democratic statesmen as Edvard Benes and Jan Masaryk, as they tried to negotiate with such Communists as Klement Gottwald and Stalin himself.

The campaign of infiltration followed a preconceived plan, first capturing the mind through persuasion and protestations of nationalism, freedom, democracy- then moving inexorably from the local to the national level, in labor unions, political organizations, channels of communication, the police, the army, the government.

This is a moving and objective record of an important event in modern history, and a revealing case study of the Communist capture of a country. Mr. Korbel has based his account on interviews with participants, on unpublished memoirs and documents, on Communist materials published after their seizure of power, and on his own firsthand knowledge and experience.Originally published in 1959.The Princeton Legacy Library uses the latest print-on-demand technology to again make available previously out-of-print books from the distinguished backlist of Princeton University Press.

These paperback editions preserve the original texts of these important books while presenting them in durable paperback editions. The goal of the Princeton Legacy Library is to vastly increase access to the rich scholarly heritage found in the thousands of books published by Princeton University Press since its founding in 1905.

Comments
Comments for "The Communist Subversion of Czechoslovakia, 1938-1948: The Failure of Co-Existence":