Water and Ice: The Tragic Wrecks of the Bristol and the Mexico on the South Shore of Long Island Arthur S. Mattson 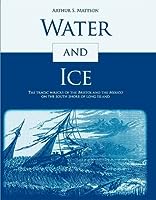 WATER AND ICE is both an exciting, newly-discovered sea story, and a detailed reference book that belongs in the book-collection of anyone interested in maritime or immigration history.Arthur Mattson’s original research into the maritime history of Long Island and the Port of New York in the 1830s tells of:• Two dramatic shipwrecks and rescue attempts on the South Shore of Long Island.• A mass grave in the village of Lynbrook, containing 139 victims.• Merchants, sailors, passengers, and tall ships in the Age of Sail.• The brave men and women (and the cowards) involved in the wrecks.• The horrors of transatlantic immigration in the 1830s.• Racial and ethnic discrimination on Long Island and in New York City.• Walt Whitman and the profound influence the two wrecks had on his poetry.This beautiful, 8½ x 11, 280-page history – with full index and bibliography – is the thrilling, true story of two American tall ships, the Bristol and the Mexico, that in the winter of 1836-7 were wrecked off Rockaway Beach and Long Beach, only a few hundred yards offshore.

It is an extensively-researched, long-lost story of greed, self-interest, and dereliction of duty on the part of New York City’s merchants, ship captains, and harbor pilots in the 1830s.The twin disasters resulted in the deaths of 215 people, 100 of them by drowning on the Bristol and 115 by freezing to death on the deck of the Mexico.

It is a story of unrealized hope for the hundreds of immigrants (most of them poor and Irish) squeezed aboard the two cargo ships as if they were barrels of merchandise, and referred to as “ignorant, lazy, vicious, and degraded pigs.” The book describes the tragic events leading to the interment of 139 of their unclaimed bodies in a mass grave in Lynbrook.Water and Ice reveals the dramatically different ways that Long Islanders of the period reacted to the wrecks on their shores: the incredibly brave rescuers, the “fiends in human form” who cut off the fingers and earlobes of drowned victims to get at their jewelry, and the artists and poets, including Walt Whitman, who wrote passionately about the wrecks in Leaves of Grass.With the passage of 170 years, however, the tragic, needless deaths of 215 passengers and crewmen went from the biggest news story of the years 1836 and 1837 to oblivion.

The role of Captain McKown of the Bristol as an inspiration for the maritime traditions of “women and children first” and “the captain is the last to leave his ship” disappeared from memory. The silver cup awarded to the brave rescuers of the Mexico was melted down. The saber of Captain Winslow was stolen and fenced. The Currier prints became arcane collectors’ items. The record of dereliction of duty of the harbor pilots, the racism and cowardly self-interest of Captain Winslow, and the outrageous conduct of the body-robbers of the Bristol were all reduced to hazy, unwanted—and ultimately lost—memories.

Comments
Comments for "Water and Ice: The Tragic Wrecks of the Bristol and the Mexico on the South Shore of Long Island":